Mechanism and potential application of Catalysis on Metallic Alloys and Compounds

Identifying the role of intermetallic compounds in heterogeneous catalysis

The rich structural chemistry of intermetallic compounds allows providing peculiar combinations of the crystal and electronic structure for heterogeneous catalysis in the gas and liquid phase as well as electrocatalysis. Electronic and geometrical influences of catalysed reactions can thus be probed in a quantitative way by using electronically similar compounds or isostructural compounds with different valence electron concentration (Fig. 1).[1] Since this requires knowledge of changes to the materials under reaction conditions, research within the RAD comprises operando experiments, i.e. characterisation of the materials under catalytic conditions, catalytic testing in various reactions as well as quantum chemical calculations to enhance the understanding of the experimental results.

Figure 1: Catalytic properties of Ga1−xSnxPd2 in the semihydrogenation of acetylene. Conversion, selectivity to ethylene and activity of the samples are shown over the nominal composition and the composition of the near-surface region under reaction conditions as determined by XPS. Dashed lines are a guide to the eye.[1]

Besides the direct use of intermetallic compounds, they can also be used as precursors. The targeted decomposition, e.g. by controlled oxidation, can lead to materials with high specific surface area as well as a high concentration of metal-oxide interface. The latter has been proven in the last years to be of outmost importance to achieve excellent CO2-selectivity in the steam reforming of methanol (Fig. 2)[2] – an important step for the CO2-neutral Methanol Economy [3]. 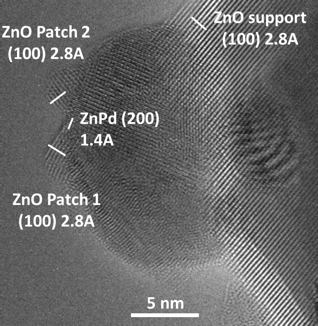 Fig. 2: HRTEM image of a single ZnPd particle (state II) with two ZnO patches on the surface, both exhibiting ZnO(100) lattice fringes of 2.8 Å. The ZnO support is also clearly visible with lattice spacings of 2.8 Å. The ZnPd lattice distances (measured at 1.4 Å) can be assigned to the (200) lattice planes.[2]

The RAD catalysis is strongly connected to the RADs Complexity and Development of new metallic alloys and compounds within the network to explore the catalytic properties of intermetallic compounds for known and new catalytic reactions as well as to develop innovative materials based on the gained knowledge.

The projects in the RAD are focussing on the following topics:

Results from the RAD catalysis are frequently published in highly ranked journals, presented at the ECMetAC Days and the international symposium “Intermetallic Compounds in Catalysis (IMCAT)” which is organised in the framework of ECMetAC since 2010. Recently a Focus Issue on intermetallic compounds in catalysis was published in Science and Technology of Advanced Materials (add as link https://www.tandfonline.com/toc/tsta20/20/iMC).